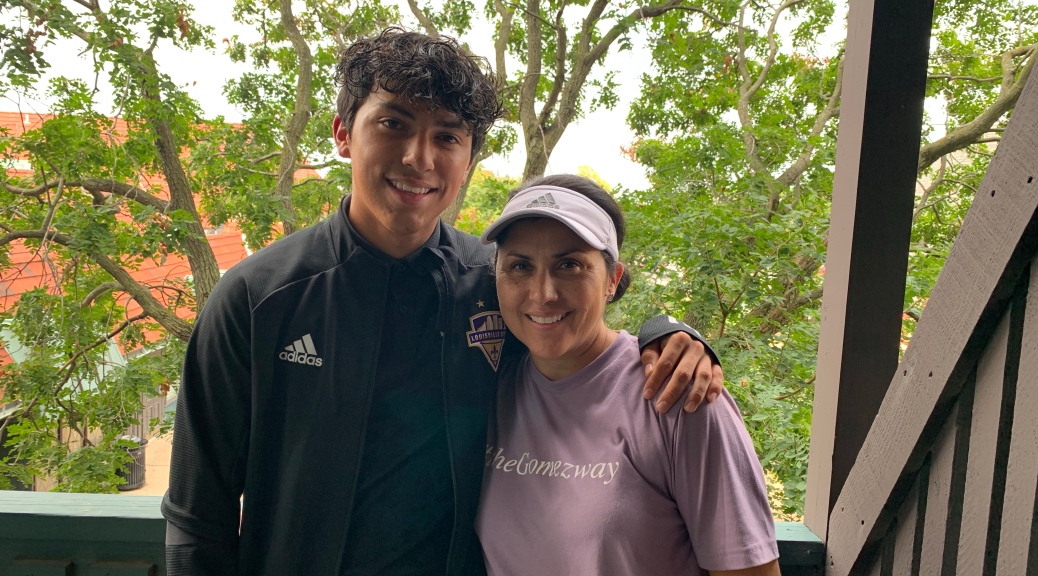 When an opportunity arises for a teenager to play football away from home, there are very few parents who can afford to drop everything and accompany the player in such pursuit. We continuously hear that young footballers and their families sacrifice core family experiences to “chase the football dream” away from home. The narrative behind those sacrifices typically involves generic terms/phrases such as family, friends, finances, education, and an overall support system normally provided by a place called “home”.

But what does that mean? Well, it’s all relative; see, moving within the United States beats having to relocate to another country and that will be part 2 of this post. Similarly, moving within the same state beats moving across time zones. For now, let’s talk about the Gómez’s most recent experience.

Earlier this year, we embarked on a new football adventure and as prepared as we thought we were thanks to Johan living in Portugal and after having both boys live an hour away in Frisco for years, Louisville threw a few curve balls at us.

Jogo has always been a solid student (what can we say as his family right?). Well, he regularly takes AP classes, is learning a new language and overall holds himself to a high standard academically. In his first move to Frisco, he went from a Christian learning setup to a secular one. As expected, the quality of instruction at the FC Dallas mandated schools was significantly lower but ultimately free of charge. On the bright side, those schools were more diverse in many aspects and we loved that. Jogo made the best of his time there and to be honest, he suddenly had access to other extracurricular activities that his small faith-based school didn’t have. Unfortunately, he was not allowed to participate in any of those due to football training restrictions.

Back in February of this year, he moved to Louisville, Kentucky which forced him onto an online high school setup due to practice times. Remote learning as a sophomore wasn’t ideal but it’s what the circumstances necessitated. While we are very satisfied with the online setup our family found for Jogo; it’s less effective than onsite learning which is what empirically works best. However, COVID ultimately changed a lot of learning platforms this year for everyone. In hindsight, one could argue that Jogo had a head start with remote learning when it came to self-paced education.

As most of you know by now, most online learning setups involve a ton of work for parents. In our case, we have an adequate amount of time to devote to that activity but not every parent does and thus, consider that time commitment if going this route. Jogo is thriving at school with an online setup but the motivation to do academically well isn’t ever going to stem from the team staff and much less from his classmates like it was at the FCD’s brick and mortar schools. Sometimes Jogo has to dig deep and be extra resourceful to stay on top of his academics whose activities don’t always align with LouCity football activities. Consider the player’s self-motivation (grit) aspect carefully when choosing an online setup. Similarly, the high school social aspect is lacking in a remote-learning environment as important events such as PROM, and a regular graduation will never take place for Jogo…other more banal activities he’s missing out on are attending football games or simple stuff such as just sitting down to eat with his non-football friends in the school cafeteria on a daily basis…

Jogo has to cook everyday. While it’s a very useful life skill; it could be very time consuming and of course something to factor into a decision by the family. We are fortunate enough that Jogo has enjoyed the culinary arts from an early age. Mom enjoys cooking and teaches him remotely (makes videos) so it has never been a chore for Jogo. He finds cooking very therapeutic. However, as a teenager, eating three (or more) daily meals could be a financial blow for the parents of a young player who doesn’t find cooking appealing, has a limited desire to learn or for a player who dislikes grocery shopping as eating out gets expensive quick.

Jogo grocery shops about twice a month and it has proven to be logistically challenging where he lives in Louisville. We thank his roommate, LouCity’s Chaplain, and Uber as without them, it would be extremely difficult to purchase food (hot or cold). Be aware of transportation needs as you embark on a new football adventure for your teenager. Will a car be needed? Is there public transportation? Louisville has public electric scooters (Lime) which are fun and practical rides for short distances but just like eating out, using them gets extremely pricey quick.

When Jogo moved to Louisville (and up until now), he didn’t take a car with him. We made that calculated decision because the apartment where he stays is near the training facilities and Lynn family stadium. Both are within a walking/biking distance from his residence but sometimes the weather inclemency make it difficult to do either. As a result, he rides with his roommate or other teammates for football related activities. This however, poses a challenge as there are times when he has to be at the training facilities or stadium earlier/later than his roommate/teammates so he must hike. The additional exercise is great for a young athlete given Louisville beautiful weather; however, 2020 has brought some unique social-political nuances to several US cities, among them Louisville, which make walking a questionable choice and living so close to downtown Louisville hasn’t exactly been a blessing.

As most of you know, Louisville has been severely impacted by socio-political events in 2020. At times, it was worrisome to have our then 16-year old son be within walking distance from all the daily protests (which sometimes turned violent), police presence (blaring helicopters, curfew enforcing activities, etc.), and everything that came with those events. As a family, we prayed and hoped for the best especially when Jogo had to walk through some of it on his way to/from football activities. We learned a lot from the past few months.

One would think that common sense can keep somebody safe but that’s not always true. Jogo’s inexperience and “look” sometimes kept us up at night as he navigated through a new city. We understand socio-political protests and demonstrations are somewhat random but there are cities (even countries) that are historically more prone to those events than others. Do your homework and make a holistic decision for your player. The player’s safety -on and off the field- when making a decision to go play away from home should be paramount.

Other safety uncertainties (not unique to Louisville) that 2020 brought with it were health concerns. As if having your teenager a thousand miles away wasn’t enough, COVID happened. To be fair, we are somewhat thankful for it as it kept people off the streets in downtown Louisville (well, to an extent). Jogo started undergoing frequent COVID tests, and LouCity’s medical staff did what it could to keep everyone safe. Jogo did an excellent job at staying in his “bubble” and not having a car helped a lot. All of a sudden, other medical aspects of his health turned secondary but they shouldn’t be neglected.

It’s never ideal having your teenager miss doctor’s checkups. I mean, going to see the family doctor, dentist, chiropractor, optometrist isn’t really the same when one is a thousand miles away from home with no car and limited support from the people around you. Make sure you do your research and locate medical staff for your player near the location where he’s staying. Jogo’s location in Louisville proved to be a bit too difficult to locate nearby medical staff (outside the team’s) for our insurance carriers so when he returned home recently, we immediately took him to every possible doctor since he needed to embark on his next opportunity.

In summary, there will be many sacrifices that a family and player will have to endure to pursue any dream with professional aspirations…professional sports just happen to start at an earlier age. In the end, any life decision will involve some level of risk; however, make it a calculated risk by trying to remove as much uncertainty as possible AND more importantly remove it from the player’s already full plate. The players need to focus on “on the field” stuff as much as possible.

Ask questions, talk to current/former players, young player’s parents and definitely team staff. Know that in the end, there’s no unique way to “chase the dream” and everyone’s path is unique. Understand that each person will give you their version of their truth and you as a family will have to consume, process, and make a decision based on that information. We hope that blogs like this one continue helping football decisions for the betterment of the sport.

Please reach out to us if you ever want to know more about any of our experiences and the paths we are pursuing for our kids. We don’t write every detail of our experiences for obvious reasons and there’s more that meets the eye. We are always happy to help: info@thegomezway.com. Until next time. #theGomezway

The chums continue producing quality content for the football community. This week’s guest is QPR’s Charlie Kelman. He’s not only a clinical U20 MNT pool striker but also a very humble teenager. Although he never played for the FCD touted academy, he has a great relationship with FCD current and former players. In the podcast, he was asked about “the game” where he scored 4 goals against the FCD’s pre-academy team after being turned down by FCD staff to join the academy. He also talks about his aspirations, dream club and as every other guest on the podcast defines success in a very family-oriented type of way.

This site uses Akismet to reduce spam. Learn how your comment data is processed.